I’ve included extracts from Oklahoma City Council meetings before but they’ve focused upon particular hot-topic issues when I have. This article is different — it’s more akin to the theme, “a day in the life” of city council. While certainly not touching upon everything that occurred in the 4 hour 11 minute council session, it does give a broader view of the sorts of things that can and do occur from time to time — you might call it, “City Council 101.” So, get your popcorn, put your feet back, and enjoy this eclectic assembly of videos from the May 31 council meeting. Taken together, they show that it’s not always “serious” at City Hall and that it’s not just the “hot topic” matters that can be interesting as well as educational. 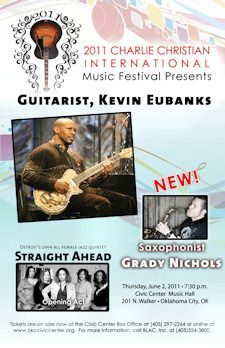 The Morris McCraven Trio was present to kick off and publicize the 26th annual Charlie Christian International Music Festival sponsored by the Oklahoma City Black Liberated Arts Center (BLAC), this year’s events being on May 31st – June 4th. McCraven’s trio has been opening the festival since its opening year, 1985, and this year was no different. Credit for the above photo belongs to Oklahoma City Music: Deep Deuce and Beyond by Anita G. Arnold (Arcadia Publishing 2010).

To be sure, not all such city council events are as pleasurable as was this overture, but they are all important and, to lesser or greater degree, entertaining, as will hopefully be observed by the above and that which will shortly follow. THE SETTING. Today’s art deco City Hall was part of the Civic Center projects built during the Great Depression in conjunction with and assisted by the federal Works Projects Administration and meetings of City Council, along with many other elements of city government, have been conducted in that building since 1936 or 1937 (I’m checking for the exact opening date). The City Council chamber is a high-walled room located on the second floor. The images below show the “horseshoe” at the north end where city council members, the mayor, and city manager, municipal counselor, and city clerk sit, as well as a view looking south at the back of the chamber, both taken from the May 31, 2011, city council video. THE REGULAR CAST. Oklahoma City is divided into eight wards each of which has a council member. With the mayor, these nine people are the elected officials of our city government, each having one vote (the mayor did not always have a vote unless a tie was present among council members, and I don’t know when that changed). With them, three seats are present on the horseshoe for non-elected positions in city government, they being city manager, city counselor, and city clerk. From left to right on the back row, are Gary Marrs, Ward 1; Ed Shadid, Ward 2; Larry McAtee, Ward 3; Pete White, Ward 4; Kenneth Jordan, Municipal Counselor; Jim Couch, City Manager; Mick Cornett, Mayor; Frances Kersey, City Clerk; David Greenwell, Ward 5; Meg Salyer, Ward 6; Skip Kelly, Ward 7; and Pat Ryan, Ward 8. SUPPORTING CAST. Several other city employees regularly appear at council meetings, many others than I’ll name here. At this particular meeting, these were two who appeared: Russell Claus, Planning Director, and Craig Freeman, Budget Director.

TECHNICAL CREW. Today, we enjoy having the opportunity to watch city council meetings on Cox Channel 20, both live and in at least one repeat on Channel 20. As well, video recordings are made and can be played on your computer at any time. Saving, and editing, the May 31 meeting video is where the snippets came from in this post.

But, that wasn’t always possible. Back in the days of a fractured city council, on January 10, 1962, the Oklahoman reported that city council voted 5-1 to “hazard the political liabilities” of proceedings being recorded by a tape recorder . “The vote was a victory by William C. Kessler, Ward 1, who has been campaigning for recording of council proceedings for some time. ¶ The project has been delayed by objections from some members that the tape recordings might be tampered with by someone engaged in political skulduggery.” Judging by the tenor of relationships of and actions by some of the councilmen in that time, good reason might exist for such suspicions.

In any event, it is different today, and to the unknown and unnamed city employees who make the television and digital presentations available, we owe our thanks. To view City Council (and other) agendas and, where/when available, videos of the proceedings, go to http://www.okc.gov/AgendaPub/meet.aspx and you will see a page something like that shown below — I’ve cropped and edited the screen capture for better presentation here. Click the image for a larger view. Notice that I’ve highlighted a couple of videos available there right now. Just click on such an icon and another window will open in which you can observe the video, as shown below. Click on images below for larger views.

In Internet Explorer, the “● Normal, ❍ 2x & ❍ 4x” enlargement radio buttons below the video work. In Firefox and Chrome, they don’t. In this instance: Danita Hundley a resolution approving the Rotary Club of Oklahoma City’s teacher of the month was approved; the Oklahoma City Boathouse Foundation was acknowledged and commended as having received a community leadership award from the President’s Council on Sports, Fitness and Nutrition; Anita Arnold and Rhonda Mitchell were honored for their involvement with the 26th Charlie Christian International Music Festival; Lt. Commander Mike Urton was present to receive the mayor’s proclamation of Navy Week in the city; and the city received its second consecutive Phoenix Award from the U.S. Environmental Protection Agency for environmental excellence, that being for the conversion of a land fill area which became the Dell campus in Oklahoma City.

ROUTINE BUSINESS. Without intending to minimize or trivialize the importance of the less dramatic types of council business, every agenda has numerous items which are non-controversial and are often dealt with by a single vote on an entire list of items, and that’s fair. Sometimes brief discussion occurs even if disagreement is not present. Sometimes non-city-wide contested items draw numerous citizens to speak. Some of each of these non-city-wide issues were on the May 31 docket and the following 23-minute video collage presents seven (7) exemplars of the types of things that the city council must decide.

(5) On a disputed item, Pat Ryan and several citizens discuss whether a neighborhood easement providing access to an undeveloped common area should be closed; (6) Gary Marrs makes comments upon changes made to the city’s electrical code for new homes which will raise construction costs on a new home by around $600; and (7) a citizen presents a serious problem with the empty house next to his which is used for prostitution and drugs.

Another Example: Union Bus Station’s Abandonment and Future Use. This brief video clip shows that Greyhound will shortly be moving to different quarters, at least temporarily, on Martin Luther King & Reno.

THE DRAMA BEGINS. What to name the city’s new boulevard which will replace the existing I-40 when the new I-40 crosstown opens in 2012 consumed a fair amount of discussion, but not much dispute.

THE PLOT THICKENS. Did you know that a “smoking room” still existed in the City Hall Building? Who knew! Ed Shadid proposed that it be shut down.

SWORDS ARE CROSSED. The greatest amount of council debate, more akin to swashbuckling, perhaps, occurred with regard to Ed Shadid’s proposal, co-sponsored by Pete White, that a 3-hearing process/procedure be adopted by city council concerning certain types of contracts which deal with development of real property owned by the city as well as a few other matters. Some council members showed every appearance of being defensive and offended by Shadid’s proposal (Marrs, Ryan & Salyer), and even Pete White didn’t think that the proposal went far enough. In the end, the proposal was deferred (continued) until July 19. The full 25 minutes of council discussion appears below.

Interestingly, if the procedure which in-fact resulted in the earlier hearings on the then proposed Alliance entity would serve as an example, Shadid’s proposal would only add one hearing to the procedure used for that proposal since, with the Alliance matter, the 1st hearing did occur — the one in which the proposal was presented and discussed by council members but no vote taken — and a second hearing occurred two weeks later with further discussion and vote. The only element missing in the Alliance proposal’s procedure was the hearing sandwiched between those hearings which would provide for discussion, but no vote, by citizens and council members. See this earlier article on Alliance and this earlier one, also.

Oddly, this middle element of Shadid’s proposal, the hearing designed specifically for citizen input, was hardly mentioned during the 25 minutes of debate.

CLIFFHANGER ENDING. At the end of council meetings, members are given an opportunity to make closing remarks, and council member Ed Shadid gave a dandy — he called the topic a tsunami about to hit the city.

In a meeting last year with some of Boston’s most influential business leaders, a consultant grimly warned that the city’s new convention center is losing millions of dollars a year because it can no longer compete with the nation’s largest venues.
The Boston Convention and Exhibition Center, opened just seven years ago, is so short of exhibit space and hotel rooms, the consultant said, that officials need to consider a mammoth taxpayer-funded expansion.
To some, the consultant’s conclusion was shocking. But to others, it rang familiar.
Over the past decade, the same firm, Convention Sports & Leisure International, has produced similar findings to support expansions in Philadelphia, San Antonio, Washington, New Orleans, and other cities. Despite finding widely different conditions from city to city, in nearly every circumstance the firm’s recommendation was construction of bigger exhibition halls and hotels. A second convention center consultant for Boston, HVS International, has made similar findings around the country.
But many of the cities that subsequently expanded are not seeing the predicted economic benefits, and some of the facilities are struggling financially.
In Minneapolis, a center expanded at the advice of principals from Convention Sports is beset with low occupancy and huge deficits. Convention hotels built in Baltimore, Austin, and Phoenix based on HVS findings are doing so poorly their public managers suffered hits to their credit ratings.
And in Washington, D.C., a center that opened in 2003 is producing much less hotel business than Convention Sports had predicted, according to the city’s convention agency.
“These consultants always say there is this untapped potential out there,” said Marc Scribner, an analyst with the Competitive Enterprise Institute. “But they are consistently wrong.”

If the convention center’s timeline does receive discussion on June 14, it should be a very lively discussion, indeed.

This concludes my summary of what one might expect at any council meeting. It is plainly obvious that all members are earnest in their work and take it seriously. Regrettably, it can, from time to time, be just as obvious that council members sometimes have thinner skins than they should and take proposals personally and not on their merits. If everyone would lighten up just a little (including writers like me), that would be a good thing to do.