This post was originally written July 20, 2006, and was one of my first blog articles at Doug Dawgz Blog. It has been updated since then a few times, the most recent before this being in April and the most recent being today, July 21, 2010. Thanks to all of you who have commented on this post … which is probably the most visited article in my blog … it has certainly generated the greatest number of comments (70 as this is written). This update substantially updates the artifacts section at the end of the article. A menu is also added there. First, a show of hands: How many of you remember that, driving south on Lincoln Boulevard toward the Oklahoma Capitol, it ran smack into NE 23rd just north of the capitol? I don’t know when the change occurred, but in days gone by Lincoln Boulevard and NE 23rd intersected with a plain ol’ stop light (at least, that’s my recollection).

As a high-school kid traveling from to Okc Lawton High for debate trips (I was born here but I mainly grew up in Lawton), the two places that stand out in my mind just north of the capitol are Beverly’s Chicken-In-The-Rough and the Park-O-Tell – both being a part of the US Highway 66 nostalgia. They are part of mine, too!

In 1936 Beverly and Rubye Osborne were driving west from Oklahoma to California. They had no reason to be joyful. They were middle aged and the Depression had wiped out their savings. [Ed. Note: another version of this story places Beverly’s restaurant business as starting in 1921 and the trip was mentioned as a vacation, not an exodus, as this article implies. See The Vanished Splendor II, Edwards and Ottaway (Abalache Book Shop Publishing Co. 1983)].

On this particular afternoon it seemed that everyone in the state was attempting to scape the famine of the Oklahoma dust bowl. With not much more than their meager belongings and a basket of fried chicken, Beverly Osborne coaxed his Ford pickup across the barren prairie.

Suddenly, a bump in the rutted road scattered the chicken and basket. Picking it up, Rubye complained “this is really Chicken in the Rough.”

With that chance remark, a fortune was born. Beverly turned his truck around and headed back home. A man who, on instinct, had made a modest fortune and lost it – Beverly reasoned that “fingers were made before forks” and that chicken could be a cheap source of food at a time when incomes were sparse. Beverly learned from his previous business experience and failures that every business must provide customer satisfaction by identifying customers’ needs and how to satisfy those needs better than anyone else. Soon, with the money he had received from the sale of his wife’s wedding ring, he had an operation serving fried chicken with shoestring potatoes, hot biscuits and honey. That was the delectable meal that started “Fast Food – Fried Chicken Franchising” – long before McDonald’s or Kentucky Fried Chicken.

By 1950, when Time magazine ran a feature article on the Chicken in the Rough operation, Beverly and Rubye Osborne were grossing almost two million dollars per year, had sold 335 million orders of Chicken in the Rough and had created 250 franchised outlets including some as far as Johannesburg, South Africa.

Now, how much of the above is fanciful, I don’t know. But, I do know that I just loved the chances to venture into this spacious restaurant just north of the capitol:

Click on any image in this article for a larger view (credit: Vanished Splendor II, Edwards and Ottaway, above)
Apparently, the restaurant on Lincoln was called a “drive-in” early on, though this old postcard says that it seated 1,000! Some drive-in! (credit: www.route66roadfood.com)
A prize was even offered for sending postcards to Beverly’s main office in Okc which were postmarked from enough cities (though the terms of the offer varied – according to postcards on the web – from $100 to $250 – and either “all” or “25” cities).

Here are a few more pics – the 1st shows the “drive-in” as well as 2 other Beverly’s in Oklahoma City, Beverly’s Grill (downtown, 209 W. Grand … now Sheridan, the original Beverly’s) and Beverly’s Gridiron, 1207 N. Walker, which has now become the 1492 Restaurant: 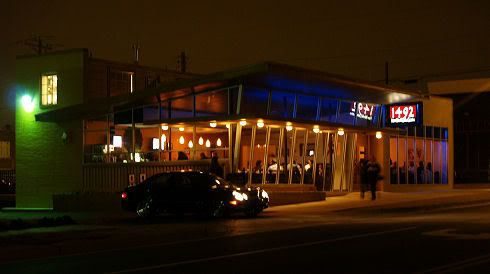 Showing Context Next to the Warner Theater A postcard from Charles G. Hill’s Dustbury shows that the corporate office was once located downtown at 209 W. Grand. In one of the comments at the end of this article, Dustbury’s Charles G. Hill recalled that another Beverly’s may have been located on North May, near the old May Theater which is now an antique shop, and that the current occupant of the old building may be Jimmie’s Egg … Doug Dawg doesn’t know, but here’s a pic I took on 2/21/2008 of that location … Another Oklahoma City Beverly’s was located one block west of Classen Boulevard on NW 23rd. It became another restaurant several years back but was later demolished when the Walgreens Pharmacy was built at that location.

Beverlys were spread throughout the nation … and one or a few in Europe, even. The early image below shows some of the locations. (credit: www.route66roadfood.com)
The remaining remnant of Chicken-In-The-Rough was Beverly’s Pancake Corner at the northwest corner of Northwest Expressway & Pennsylvania, but the building was razed a few months ago and is no longer standing. However, the owner moved the restaurant to a “modern” building located immediately north of Integris Baptist Hospital at the northwest corner of Northwest Expressway and Independence. The old sign is gone, but you can still go there and eat some Chicken-in-the-Rough or a Big Bev Burger, as well as to see lots of old pics. According to http://chickenintherough.com/History.html, members of the Carroll family purchased the Chicken in the Rough rights from Beverly Osborne when he was 84. Maybe so. But, not today, according to http://www.wileypost.com/links/cir.html, Renaee Khosravani is the present enthusiastic owner (now at the “new” location at NW Expressway & Independence, shown above).

Updated Note: On March 20, 2008, I was nearby and decided to have a Big Bev Burger in the new digs … while there, I asked Ms. Khosravani whether the “old” sign would be used for the new restaurant … she said, “The round part will be,” but I didn’t then remember what the “round part” was … and, I asked, “What about the chicken?”

Well, of course, the “round part” IS the chicken!

So, expect to see the round-part-chicken out front before too long.

The Big Bev & Fries were just as good as always. Here are a few inside pics … Beverly Osborne was one of Wiley Post’s sponsors in his 1st round-the-world trip – a Beverly’s logo is even on the Winnie Mae!

(credit: www.wileypost.com)
(the pic from the other-website no longer exists — I’ll leave a light on in case I find a duplicate somewhere else)
Now, how this, and the post about Wiley Post (above) come together is that Ms. Khosravani may come to be operating a NEW Chicken-In-The-Rough in the diner at the new Wiley Post Heritage of Flight Center!

(credit: www.wileypost.com)
(the pic from the other-website no longer exists — I’ll leave a light on in case I find a duplicate somewhere else)
ARTIFACTS. According to a May 24, 2006, Journal Record article, the Oklahoma Historical Society includes a Beverly’s collection of memorabilia which are also easily found on the internet. When this section was added a few months ago, I’d only gotten one of them — the finger cup shown below — but since then I’ve fared better.

FINGER CUPS. Some call ’em “finger bowls” but they look like “cups” to me. Yep, that’s the only physical artifact that I had when this article was modified in April 2010 and it’s probably not even an original piece but is more likely a replica … you probably wouldn’t find any DNA on it save for what my own grubby fingerprints might have left behind. That’s OK, you take ’em as you find ’em and then you say thank you very much. I picked this item up at an antique shop on North Western about four-six months ago (from April 2010). The cup below is 3 ½” high, 4″ diameter at the top and 2 ¾” diameter at the bottom. Click on each of the small pics below to open a much larger view.

But what were they for, some youngsters reasonably inquire? [At this point in the conversation, we older guys and gals have an unusual opportunity to be creative, but I’ll not go further with that right now.] Remember … there was no silverware, you picked up the chicken with your fingers and chowed down … and then you cleaned up your fingers at the end of the meal in a water-filled finger bowl (today we’d probably want to add a lemon slice) instead of wiping your hands on your trousers or your shirt. See … we Okies know what we need to do … we spread that knowledge across the nation … Miss Manners knows that we use the finger bowl and a napkin, and there you have it. MIKE ANDERSON COLLECTION. A new good friend that I formed during the MAPS 3 wars last year, Mike Anderson, former president of the local firefighters union … and even though we were, quite respectfully, on different sides of some issues during that time … has graciously shared with me his and his mother’s collection of Beverly’s artifacts. He also said that he would write a sub-article right here which describes his family’s connection with Beverly’s … but I don’t have that article yet so I’m going ahead with the posting of photos taken in May 2010 of that collection.

Mike relates that one of his grandparents, I can’t recall which, worked at the Beverly’s warehouse or some such name which was located a block or so south of the Biltmore Hotel, probably on Harvey. Mike will hopefully fill in the details about that. As I understand it from him, Beverly’s would store and ship its hardware (e.g., plates, glasses, etc.) to the various Beverly’s restaurants in the country from that location and, probably, the items shown below were originally located in that warehouse which accounts for their pristine condition.

Enjoy the photos. Click on any image for a 1024px wide view.