Everyone loves a parade and, since 1889, Oklahoma City has certainly had its fair share of them … this post shows images of parades gone by … click here for the October 14, 2007, Oklahoma Centennial Parade. As more “old” parades are found, I’ll modify this post.

Click on most every pic for a larger view
Vintage Parades. The earliest parade I’ve located was the July 4, 1890, parade on Broadway. The large “white” building toward the top is the Post Office completed 3 days earlier at 107 N. Broadway.
Credit Terry L. Griffith’s Oklahoma City – Land Run to Statehood (Arcadia Publishing 1999)

Zooming in, Check Out That Brass Band! From the same source (Griffith, Landrun to Statehood), is this 1893 parade. From what I can decipher, this view looks north on Broadway from Main, but that’s not what Griffith’s text says:

This view looks east from the Aurora Bargain Store located at 2-4 North Broadway Avenue (Mose Herkowitz, proprietor). The next visible building is W.W. Storm Hardware, while on the left midway up the street is the First National Building with the post office in the distance.

The “post office” mentioned was built in 1890 on the west side of Broadway at 107 N. Broadway, north of Grand (Sheridan) and south of Main …

… so I’m thinking that Griffith was mistaken that this was an east-bound view.

In days long gone by, Easter Day Parades were quite the thing — as apparently was true for any event which would give an excuse for a parade! The pics below are from the same source as above, Griffith, Landrun to Statehood. Getting Ready For The 1900 Easter Parade Teddy Roosevelt and his Rough Riders came to town in July 1900, so, of course, it was parade time again, just a short time after Easter! He stayed at Hotel Lee (later to become the Lee Huckins). A Parade in 1906 (presumably Easter)
Credit Griffith, Landrun to Statehood As to the above pic, Griffith’s text reads,

While it is difficult to identify this car or its passengers, it is not difficult to tell that these ladies were proud of their handiwork. This electric car and the occupants posed before a downtown parade.

The Year of Statehood, 1907. Presumably, with Okc’s penchant for parades, a “Statehood” parade occurred. If it did, I’ve not yet found it. But, the image below reflects a parade at about the same time.

A 1907 Parade Led by the Police Force
Credit Griffith, Landrun To Statehood The 1911 Streetcar Strike. Terry L. Griffith’s Oklahoma City – Statehood to 1930 (Arcadia Publishing 2000) describes with particularity a streetcar strike which started on March 5, 1911 — the strike was about union recognition and was led by Street Railway Employees Union Local 556 and was against the Oklahoma Metropolitan Railway Company. Griffith’s article notes that of 300 or so employees only 12 or 13 had joined the union. During the strike, it was said that “thugs” from around the country poured into Oklahoma City, pro-and-anti union. The pics below are all from Griffith’s Statehood to 1930.

Not Exactly A Parade,
But There Were Surely A Heck of a Lot of Unhappy Folks on Grand

At Left, The Colcord and Baum Buildings;
Herskowitz Building is in the Far Background

Angry Citizens Gather on Broadway In Front of the Lee-Huckins Hotel
As Charles Colcord, et al., Meet Within To Privately Discuss The Situation Parades Occurred During and After the Strike

During The Strike, on May 7, 1911
Carmen of the Street Car Company Parade on Broadway End of Strike! Let’s Have Another Parade!

Sheriff C.F. Colcord & Police Chief Bill Tilghman May Have Led The Parade
Tilghman was injured when struck by the lead car, shown below I’d be amazed if there weren’t a parade celebrating the end of “The Great War” (WWI) and I’m still looking for that.

But, skipping ahead to 1923 … Governor-Elect Walton was sworn into office on January 8, 1923. The next day, a parade which started at the old stockyards, proceeded through downtown, and ended at the old Fairgrounds on “Eastern” (Martin Luther King Ave. today) for a barbeque! The pic below is from Jim Edwards and Hal Ottaway’s Vanished Splendor II (Abalache Book Publishing Co. 1983).

The New Gov Pulled by Oxen Ditto what I said above about WWI … surely there were parades at either or both of VE Day or VJ Day … I’ve not yet found them. I’ll add them later.

Into the ’50s! “Judy” (the elephant) was introduced to the OKC Zoo in 1949, being acquired by contributions from kids and adults in the city. Sadly, she died in 1997, 46 years later. In 1950, though, the city celebrated her arrival with yet another parade! A Closer Look At Judy On The Truck Into The Turbulent 1960s. What’s a “parade?” Doug Dawg says that, “A parade is a whole shit-load of people in the streets progressing with an organized purpose.” By that definition, the Civil Rights “marches” in the 1960s fit the definition of “a parade.”

More than one such “march” during Clara Luper’s day started out at the venerable Calvary Baptist Church in Deep Deuce, shown below. 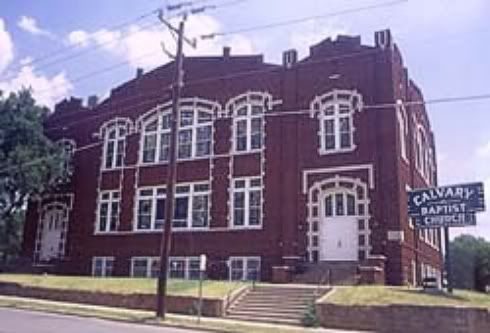 I don’t have the quality images that I would like … some were once located in the Oklahoman’s archives but I can’t find them anymore. But, below are images from 1961 when Charlton Heston graced our city with one such “march.” Into The Present. There’s always something to “parade” about! In our recent history, there’s scarcely anything more interesting that the “gay rights” parades which have enjoyed a city v. gay rights parade history! Like ’em or not, the gay rights people surely do know how to put on a flambouyant parade!

The following images are from This Unidentified Webshots Source Not exactly the demure ladies in the Easter Parades, but a lot of fun, just the same!