On Wednesday, September 3, 2008, Oklahoma City made history! Yes, this was the lowest “high” temperature on record for this day (68 ̊  for the high), and YES! THIS WAS THE GRAND DAY that Oklahoma City’s NBA team would no longer be called the Oklahoma City “somethings!” The name, hardly a secret, was unveiled: THE PRELIMINARIES. The event was set to occur at 5:00 p.m. (CENTRAL Daylight Time) right here in downtown Oklahoma City at Leadership Square in the atrium connecting the two gorgeous buildings. I got there around 4:30 and took a few preliminary pics, shown below.
Click on any photo for a larger view I had a little time to spare, so I went to the balcony for an overview Downstairs, looking around at the crowd The press was fully present and assembled And, of course, your silly “Ralphie” citizen journalist couldn’t keep away when this Official Red Ryder Carbine-Action Two-Hundred-Shot Range Model Air Rifle was unveiled and presented to Oklahoma City at A Christmas Story in September! Some brief introductions and comments 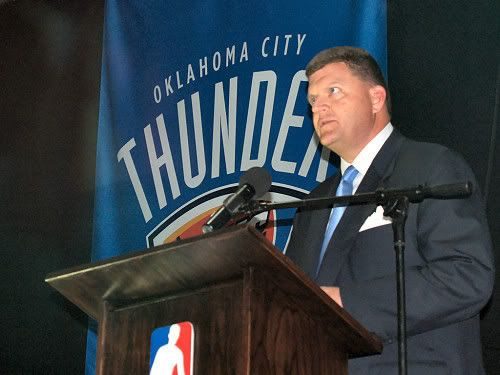 Wrapping It Up. Heck, the crowd would probably have been more than glad to hear lots of speeches and yell and go crazy for much longer than the presentation lasted … about 20 minutes. While there, I bumped into some who, in one way or another, have made a serious contribution to helping this grand day to occur. I got photos of a few, others I didn’t like Kim Searls, Downtown OKC’s marketing director, Council Member Gary Marrs and others … Josh The Eggman of HorentsCentral.com fame (soon to be renamed)
He drove to Okc from Ada to attend this event A parting view from Park Avenue, looking through the glass Press reports of this event are flourishing. But I like this one by AP writer Jeff Latzke who summarizes it this way at Yahoo Sports:

To unveil the logo, six children joined players Desmond Mason and Damien Wilkins to pull down a curtain as the AC/DC song “Thunderstruck” blared over the loudspeaker. What was revealed was a large blue banner with the logo in the middle, and splashes of yellow at the top and reddish-orange at the bottom.

Bennett said the light blue color coincides with the state flag to represent the inclusion of all Oklahomans, the yellow refers to the sun and the reddish-orange color to the sunset. With the University of Oklahoma featuring crimson as its primary color, and Oklahoma State using orange, Bennett said it was “not too red and not too orange.”

Thunder is a fitting moniker for the Oklahoma City franchise, not only as a reference to powerful storms in the area known as Tornado Alley. The Oklahoma City-based 45th Infantry Division carries Thunderbirds as its nickname, and that’s a reference to the state’s American Indian heritage. Even one of Oklahoma native Garth Brooks’ biggest hits was “The Thunder Rolls.”

“There’s just all kinds of good thunder images and thoughts, and the in-game experience of Thunder,” Bennett said. “Just here was a good sense of how that evokes emotion. It’s very powerful.”